A quick sidebar before the review. Melvin Smif’s Geekery has been nominated for an ENnie for Best Website! Voting is set to run July 11th through July 21st. I’d be very grateful for any votes received. While you’re there you may notice that one of my fellow network affiliates, The RPG Academy Podcast, was also nominated for Best Podcast. Please consider throwing them a vote as well! I’m already wildly excited and humbled to have been nominated. Thanks to all my readers for continuing to give me a reason to write. Now, on to the excellence that is WarmaHordes’ new edition!

Back in April I informed you of the impending release of the newest edition of Warmachine and Hordes. Well, just the other day I received a package on my doorstep, and a press release in my email, from the fine folks at Privateer Press hallmarking its arrival! I spent time in my last post describing many of the changes in play that we would be seeing (adding the ability to pre-measure ranged shots, changes to balance units, etc.), so let’s spend a little time just reveling in the beauty of the finished product shall we?

For my review material, no expense was spared. I received the following items;

Now, the first thing I did with my veritable horde of new gaming supplies was call up my buddy who plays those filthy, magic wielding, god killing Cygnar humans to see if he’d be interested in some trading because… well, a man has to get his hands on his Elves baby!

I’d like to formally welcome Warcaster Magister Helynna to my army. 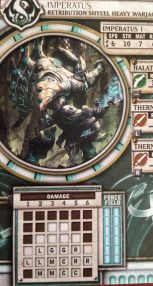 New card. Look at the way it pops off the card!

The new edition didn’t only revise some of the rules, one of my favorite changes comes from the look of each Miniature(s)’ stat card. I’m posting a side by side below. I really adore the way they expanded the area covered in the artwork. I feel in a heated, timed, game it might really help me spot the unit I’m trying to get information from. Not to mention, it just makes the cards look all the much better.

Veterans have to update their faction’s stat cards for the new edition. Each box contains at least one redesigned stat card per model or unit and in the case of most Warjacks\Warbeast you’ll get multiple stat cards.

The Faction Decks have an MSRP of $19.99 but I have seen many online going for roughly $17.95. A must have for veterans.

In recent years I’ve had the pleasure of reviewing a number of books from Privateer Press, they’ve all received high accolades from me. Great artwork, excellent binding, and chock full of information. The two core rule-books presented for this edition are no exceptions. 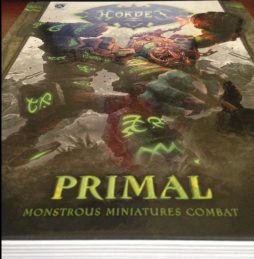 Each book comes in well over 300 pages. In the first third of each book (after a lengthy history of their respective parts of the world of Immoren) you find detailed instructions on everything you’d need to know in order to play the game. From a macro understanding of basic rules and combat to intricate details like specific scenarios and terrain. The remaining bulk of the books are mostly dedicated to vast introductions to the factions you may wish to field, followed by some useful appendixes that help explain some final peices of information needed for specific faction rules, how to play Warmachine v. Hordes, etc. 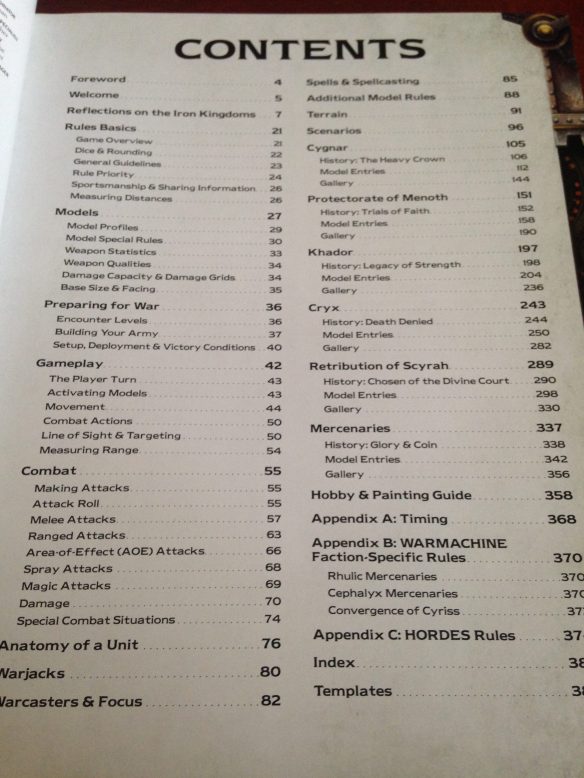 Table of Contents in Warmachine: Prime

Easily my favorite thing about these books lies with the extensive lore written for every faction. There is something unique about the world of the Iron Kingdoms, and its primal neighbors, that makes reading their histories so satisfying. You know I’ve lauded the worldbuilding present in this company’s roleplaying games (Iron Kingdoms & Unleashed), well these books here will give you the full scope of every major faction in the world. So if for some reason you aren’t into the the tabletop skirmish game, there is still something here for you. Pages and pages of juicy steampunk fantasy lore about a world at war.

Each faction is detailed by it’s history, as mentioned above, and then has an extensive list of units touched on to give the reader a decent accounting of what the faction may play like. Obviously they couldn’t place every unit in a faction on page but I did notice that there appears to be an attempt to add a good amount of the new units out there, namely the new Warcasters and Warlocks present in the new 3rd Edition Battlegroups. The artwork remains impressive, litters the books, and often times takes up entire pages. It is some really great stuff.

Each book runs at an MSRP of $59.99, and thus far that’s been about the price I’ve seen on the various shopping options. I’d say they are worth it to the diehards. If you are just getting into the game, start with a Battlegroup. They come with everything you need to get started, in fact. speaking about the new Battlegroups…

Along with the new edition, we get some new starter Battlegroups. Like I mentioned earlier I worked out a deal with my Cygnar playing friend\sworn enemy to obtain my own Battlegroup for the elves of the Retribution of Scyrah. Every one of these starter sets comes with a Warcaster (Warmachine) or Warlock (Hordes) that is exclusive to this third edition of the game, and adds in either Warjacks or Warbeasts to round out the small army. Beyond that, you are given all the tools needed to play the game with the only exception being glue to piece your new miniatures together. Each box includes:

Everything in the box is of high quality with the one exception being the ruler but honestly, you likely have a tape measurer lying around somewhere. As mentioned above the only additional items you may need to provide yourself would be some kind of super glue to piece together your miniatures and you’ll likely want to invest in some paint at some point to add your own style to your pieces.

Veteran players are going to buy these starter sets for one reason, the new Warcaster\Warlock. Which leads me to my only real complaint about the sets. I really wish they would have switched up what Warjacks\Warbeasts came in the new Battlegroups. From what I can tell, with little deviation, most Battlegroups remain completely unchanged, excepting the Warcaster\Warlock of course, from their mkII counterparts. This means that the veteran players who are buying this item are typically only doing so for one miniature. I’m not saying PP needed to craft entirely new Warjacks\Warbeasts for this release but maybe they could have just switched a few out for different models. There’s no way to be certain you wouldn’t also land on some items a veteran player might have already had but at least there’s a chance that way. However, using the same models in this edition as the last ensures that a we receive the same pieces we got the last time we bought a starter set.

The Battleboxes have an MSRP of $39.99 and are the be all end all way to get started in this hobby (at least until the Two Player Battle Boxes come out in August). Pick a faction you’d like to play as, grab a Battlebox, and go to war!

P.S. When searching for any Warmachine or Hordes battlegroup be absolutely certain you are purchasing the third edition item of the game. Things look very similar when compared to the 2nd edition. Look for descriptors mentioning that the item was produced AFTER June 1st 2016, or that it is part of the third edition of the game.