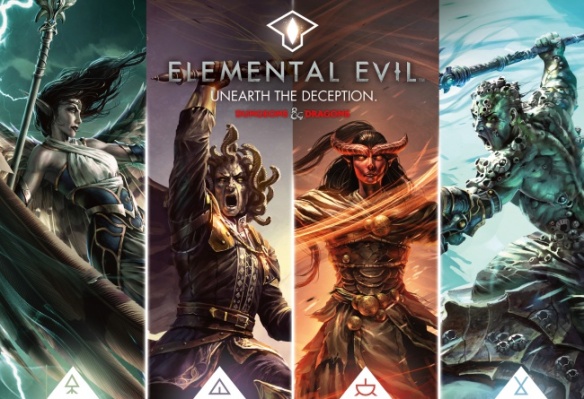 It doesn’t seem that long ago I was pining for Fifth Edition Dungeons and Dragons to finally be released and here I am, less than a year later, staring at the second Super Adventure released for the product line.  Fifth Edition is here in earnest, and I’ve seen nothing but quality books coming off their presses. Princes of the Apocalypse (PotA) is no different.  Coming in at a bulky 256 pages, PotA provides a full campaign arc that borrowers on a bit of nostalgia by using touches of a D&D classic The Temple of Elemental Evil.

Quality of the Product

There’s not much to be said here that I haven’t mentioned before with this edition’s quality. Wizards of the Coast has brought us a book every bit as sturdy as its predecessors in this edition, great binding, solid hardcover.  Nothing new to relay there. Just quality craftmanship.

The artwork is every bit as strong. If the design team set out to evoke the feeling of immersion into the elemental forces your players will be dealing with they certainly succeeded. There’s a great use of artwork here and I am a sucker for anything based on the elements to begin with.  Loved seeing scenes from the book brought to life for this.

The campaign arc represents the meat and potatoes of the book. The core story is a Super Adventure meant to take characters from level 3 to 15, with a number of adventures in the “Alurms and Excursions” portion of the book that will help characters get to level 3 if you are starting from scratch. Another nice touch is a series of hooks you can use to bring players over who have finished running Lost Mines of Phandelver.

The Elemental Princes are all wildly interesting antagonists, as are their cults, and the adventure paths your players will take may differ wildly from another tables. I am happily surprised at the openness of this campaign. Tyranny of Dragons had a bit of sandbox to it but PotA does the better job of it. Especially because while the players are meddling there are ways for the cults they face to react to said meddling, as one would expect to be honest. Plus I love that the whole thing is contained in one book. Hopefully we see that more often going forward.

Along with a solid Campaign to run WotC, and their partners for this endeavor Sasquatch Game Studio, have presented a number of new player options as well. Within the pages there are a number of new magical items for the DM to reward players with, or ruin their day with if the items lay within the grasp of their enemies. We are also greeted with a bevy of new spells for the various classes that use them, most spells having a bit of that elemental slant to them you would expect from such a story.  Lastly we have a brand new race for players to begin using, the elemental focused Genasi we know and love from previous editions. One of the cooler aspects of this additional player content is that you can find most of it, the Genasi details and the spells, in .pdf form on the WotC website. The magic items are adventure specific though.

I continue to be a fan of the physical materials Wizards has been putting out. I love that they have been working with different RPG studios to create the content as well. Both Kobold Press and Sasquatch Game Studio have brought unique elements to their work they’ve done with the design team proper for Dungeons and Dragons.  I like that trend and hope it continues. If you’re looking for some great DM content or even an entire Campaign arc for your table check this book out, it’s a great read and some solid adventuring!