DAY SIX: FAVORITE RPG YOU NEVER GET TO PLAY

In most groups I would primarily be the main GM. However, I have been lucky enough that every single one of the guys I play with in my live game and my online group, the Vagabond Gamers (feel free to join), are capable GM’s in their own right.  Due to this I’ve been very fortunate to play nearly as many systems as I run.  There are a few that I’ve run but never been able to play and I’m glad today’s #RPGaDay topic lets me get these out there!

First up, a variety of Savage Worlds Campaign Settings:

I’ll play any setting here folks, hit me up!

I love Savage Worlds, I was first introduced to it about a year and a half to two years ago and it quickly became one of my favorite systems.  Problem is, I’ve run many games in the system within its myriad of campaign settings but have rarely gotten to play the damn things myself!

Probably my top choice for a system I’ve run many times but have never been able to play.  It’s an awesome Western, well… WEIRD Western, themed campaign setting.  It’s got all the tropes you love in an American Old West setting plus plenty of extra oddities like Magic Weilders who get power from playing hands of cards with the devil, creatures from both myth and newly crafted, and Mad Science.  It’s a great system with tons of lore and mystery.  Can’t wait to play someday.

A fantasy setting in a land frozen over after the vicious “Blizzard War”. I’ve run a few things in the setting and really hope to play someday.

This is actually a reverse situation, I have only played this setting in a PbP.  I would love to either run or play it live someday.  Here you have a world of floating islands that require flying ships for transport between them.  Piracy and fantasy mix well in this air focused game!

There are other settings I’d love to play.  Hell any Savage Worlds would be nice to play, it is easily the system I least play and run the most.

Second we have Hackmaster:

I’ve spent a lot of time talking about my ownership of this game and how little I’ve even run it let alone the fact that I’ve never played the game.  It’s themes are just great, a tongue in cheek sendup for older school rules and rules lawyering.  Not to mention its smooth handling of pretty excessive violence, mostly to get a grin out of someone for the mere fact it is so violent.  Hope to play more someday. 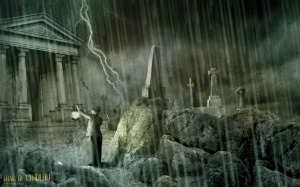 I love the works of H.P. Lovecraft… and have never played any RPG ever made that utilize the tone of those writings.  As far as I can figure my live group has never expressed much of an interest in it, but then again I’m not certain I’ve brought it up!  I will get to play in a Cthulhu based LARP at Gencon this year so at least I’ll have a taste of how a game might be run set in the Mythos.  So I’ve got that going for me.

I’ll cut it off here because honestly the games I’d love to play more are nigh infinite so the above will have to be the placeholders for my “tops” list right now!  See you all tomorrow, and good gaming everyone!

Though I’m posting every day on it’s own post, you can see every #RPGaDAY writeup HERE!